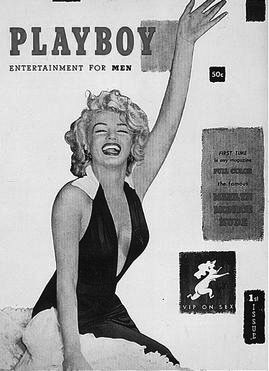 “Blessed is the rebel. Without him, there would be no progress.” – Hugh Hefner

He has been variously described as vulgar, adolescent, and exploitative. But, like him or not, Hugh Marston Hefner and his Playboy magazine were responsible for many a tectonic social shift in 1950s America.

He was born in 1926, the older of two sons of straight-laced Methodists. As a boy, Hefner wrote horror stories and drew cartoons but applied little of his 152 IQ to academic pursuits.

He graduated from Chicago’s Steinmetz High School in 1944. After spending two years in the U.S. Army, Hefner earned a psychology degree at the University of Illinois, where he created a campus humor magazine called Shaft.

Chaste until age 22, he married high school classmate Millie Williams and began what he later labeled “a deadening slog into 1950s adulthood.”

He went to work for a pair of magazines, Esquire and Children’s Activities. In the meantime, he was busy planning his own magazine, a man’s “lifestyle” periodical to be called Stag Party.

However, a Stag publication already existed, so after considering Top Hat, Gentleman, and Bachelor, Hefner switched the name to Playboy.

He assembled the first Playboy on his kitchen table. The debut issue — featuring a clothed Monroe on the cover (and unclothed inside) — hit newsstands in December 1953 with a run of 53,000 copies.

Unsure there would ever be a second edition, Hefner had purposely left off a publication date on the cover. All copies — offered at 50 cents each — sold out quickly, though, and Playboy became a winner. By 1957, Hefner was raking in $4 million annually.

Playboy became the guidebook for the unattached young male urbane sophisticate. The magazine featured literate articles, in-depth interviews with people of importance, and a centerfold of a busty, unclothed young woman.

Hefner took unabashed delight in viewing his periodical as an emblem of the rapidly growing sexual revolution and an escape from longstanding American puritanism and social intolerance.

Along the way, the now-divorced Hefner built a global empire that came to be worth $200 million.

Hefner never lost interest in beautiful young women. In 1989, he surrendered his bachelorhood once more and married Kimberley Conrad, the 1989 Playmate of the Year who was 38 years his junior. The couple divorced in 2010.

Always obsessed with celebrity-hood, Hefner paid $75,000 for a mausoleum drawer adjacent to Marilyn Monroe’s in Los Angeles’s Westwood Memorial Park. In 2009, he told the Los Angeles Times, “Spending eternity next to Marilyn is an opportunity too sweet to pass up.”