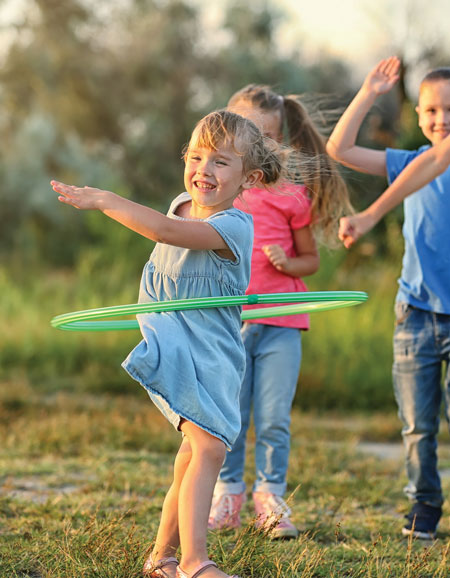 During the 1950s, Richard P. Knerr and Arthur K. “Spud” Melin manufactured slingshots, boomerangs, and paddleballs in their Wham-O toy factory in the Los Angeles suburb of San Gabriel.

The partners had recently struck gold with the plastic Pluto Platter disc, later known as the Frisbee. Like anyone in the toy business, though, they were constantly on the lookout for the Next Big Thing.

At a 1957 New York toy fair, the two were discussing boomerangs with a visitor from Australia, when he happened to mention that, for exercise in his native land, gym-class students often spun bamboo hoops around their waists by twirling their hips.

Hmm. Could there be a market here for such an item?

Knerr and Melin built a few hoops from scrap wood and then tested them with local kids to see if interest existed for such a novelty.

“We took it out into the neighborhood, the best testing ground there is for toys,” Knerr explained to writer Paul Sann. “The kids just wouldn’t put the hoop down!”

Once on the market early in 1958, Wham-O’s Hula Hoop (so named because users’ hip movements resembled the Hawaiian hula dance) became a sales sensation. For a while, the demand was so great that producing 20,000 hoops a day still meant that Wham-O was running behind in orders.

Costing about 50 cents each to produce ($3.50 today), the brightly colored, lightweight polyethylene hoops rolled off toy shelves to the tune of $1.98 each ($14.50 today).

A reported 100 million hoops were sold. At the fad’s peak, 40 or so competitors with such names as Spin-a-Hoop, Hoop Zing, and Hooper Dooper were muscling in for some of the sales action.

Records were occasionally set when it came to Hula Hoop endurance. For example, a 10-year-old Boston boy named Bobby Travers managed 18,200 turns within a four-hour period, doing so while operating under the hindrance of having a broken arm at the time.

Unfortunately, some grown-ups saw the plastic circle as a royal pain. One New Jersey school board banned Hula Hoops from the playground after kids returned to class after recess “too wound up.”

Hooping became an overnight British craze, but the British Medical Journal soon reported an increase in neck, back, and upper abdominal pains with prolonged use. Russians scoffed at the toy as a mindless craze and declared it further proof of “the emptiness of American culture.”

Like most instantly popular fads, Hoopmania exploded onto the scene overnight and died off just as quickly. In November 1958, the Wall Street Journal proclaimed, “Hoops Have Had It.”

Ten years later, though, in a reaction to growing nostalgia for the “carefree” days of the 1950s, Wham-O reformulated their nearly forgotten toy with noisy ball bearings that rolled around inside the hoop as it twirled.

Alas, the “Shoop Shoop Hula Hoop” faded fast and proved the Wall Street Journal to be right after all.