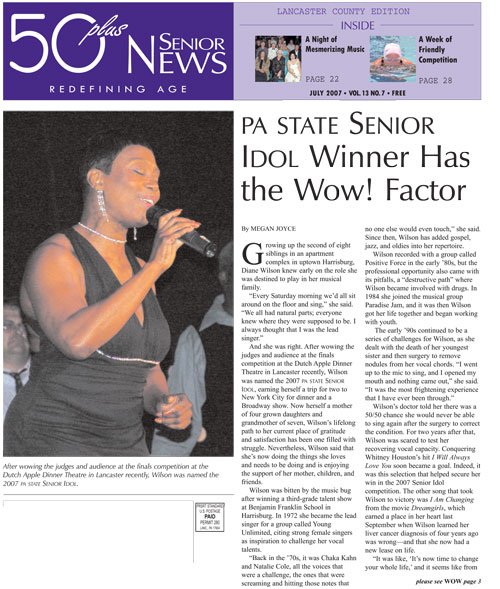 Growing up the second of eight siblings in an apartment complex in uptown Harrisburg, Diane Wilson knew early on the role she was destined to play in her musical family.

“Every Saturday morning we’d all sit around on the floor and sing,” she said. “We all had natural parts; everyone knew where they were supposed to be. I always thought that I was the lead singer.”

And she was right. After wowing the judges and audience at the finals competition at the Dutch Apple Dinner Theatre in Lancaster recently, Wilson was named the 2007 PA State Senior Idol, earning herself a trip for two to New York City for dinner and a Broadway show.

Now herself a mother of four grown daughters and grandmother of seven, Wilson’s lifelong path to her current place of gratitude and satisfaction has been one filled with struggle. Nevertheless, Wilson said that she’s now doing the things she loves and needs to be doing and is enjoying the support of her mother, children, and friends.

Wilson was bitten by the music bug after winning a third-grade talent show at Benjamin Franklin School in Harrisburg. In 1972 she became the lead singer for a group called Young Unlimited, citing strong female singers as inspiration to challenge her vocal talents.

“Back in the ’70s, it was Chaka Kahn and Natalie Cole, all the voices that were a challenge, the ones that were screaming and hitting those notes that no one else would even touch,” she said.

Since then, Wilson has added gospel, jazz, and oldies into her repertoire.

Wilson recorded with a group called Positive Force in the early ’80s, but the professional opportunity also came with its pitfalls, a “destructive path” where Wilson became involved with drugs. In 1984 she joined the musical group Paradise Jam, and it was then Wilson got her life together and began working with youth.

The early ’90s continued to be a series of challenges for Wilson, as she dealt with the death of her youngest sister and then surgery to remove nodules from her vocal chords.

“I went up to the mic to sing, and I opened my mouth and nothing came out,” she said. “It was the most frightening experience that I have ever been through.”

Wilson’s doctor told her there was a 50/50 chance she would never be able to sing again after the surgery to correct the condition. For two years after that, Wilson was scared to test her recovering vocal capacity.

Conquering Whitney Houston’s hit “I Will Always Love You” soon became a goal. Indeed, it was this selection that helped secure her win in the 2007 Senior Idol competition.

The other song that took Wilson to victory was “I Am Changing” from the movie Dreamgirls, which earned a place in her heart last September when Wilson learned her liver cancer diagnosis of four years ago was wrong — and that she now had a new lease on life.

“It was like, ‘It’s now time to change your whole life,’ and it seems like from that point, everything is just falling into place for me,” Wilson said.

A CDL driver for Capital Area Transit in Harrisburg, Wilson has also been a licensed cosmetologist for more than 20 years and owns two beauty salons. Music is her love and focus right now, performing at weddings, funerals, birthdays, and anniversaries. She is also very involved with her church and its choir.

“I try to stay busy and I try to stay focused,” said Wilson. “Sometimes it gets a little hard, but like I said, with everything that happened in my life I’m learning how to stand still. It took me 50-plus years to get to that point in my life. It’s amazing — they say when you turn 50 if you haven’t learned anything, something is wrong. I’ve learned a lot and I’ve been through a lot.”

Wilson said she “felt like Miss America” when she was announced the winner of Senior Idol and cherishes the relationships she made with the other contestants, whom she described as supportive and genuine.

“There was some great talent,” she said. “For once in my life I felt like I really had to put my best foot forward … I just thank the audience and thank everybody for thinking that I had the ability and for choosing me.”

Wilson plans on taking her mother, who has never been to a Broadway show, on the trip to New York City with her.

“Senior Idol really opened the doors for me and gave me some hope,” she said. “And so now … I’m going to have to educate myself to give to the seniors and to give to the upcoming young people who are searching and looking for a better way. It took me 52 years to get to that point, but I thank God that I’m here.”