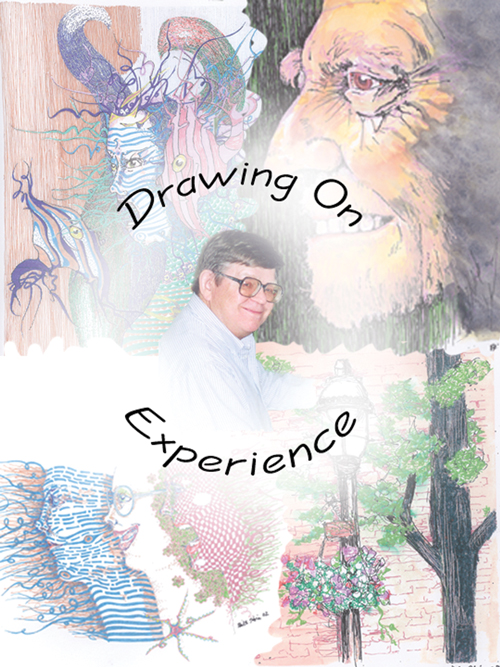 Whimsical, magical, and colorful are all the descriptors that come to mind when viewing Bill Hoin’s artwork. Upon closer inspection, the words unbelievable and intricate also spring to mind.

“I use mostly gel pens,” Bill says of his work. “People say that’s what kids use, but anything an artist uses is a tool.”

Bill’s fluid drawings are bulging with life. Within the spirals of a picture, you might see many faces, birds, and fish. His portraits are done in watercolor and gel pens and they can be very realistic or abstract.

“I think most people like what I’m doing because it’s so labor intensive,” Bill says. “Sometimes I leave areas undone so the people looking at it can add their own. I like to look at artwork that you see something different when you come back to it each time.”

As a child, Bill spent hours drawing and painting, but eventually stopped as he grew older.

“Vietnam is where I started getting interested in artwork again,” Bill says of his reacquaintance with art. “I visited villages and saw many artists and craftsmen at work. I bought artifacts from the weavers, and when I came back to the States, I started to do more myself.”

When Bill left the Army, he came back to Lancaster and earned Bachelor of Science degrees in industrial arts education and art education from Millersville University. He then went on to earn a master’s degree in art from Glassboro State College in New Jersey.

And he’s still learning his craft.

“I took a mono printing class and a papermaking class. If I come across a medium that I don’t have experience in or the equipment for, like sculpting, then I take a class.”

He even took a course for making glass paperweights at Wheaton Village in New Jersey.

After earning his degrees, Bill went on to teach high school art for five years.

“I came back with a problem from Vietnam. I was diagnosed with epilepsy two years after Vietnam, and it made it very difficult to teach.”

He went through a number of jobs before finding a draftsman position at Emtrol. Bill worked for them for 15 years until he retired at age 62 in April of 2001. Now Bill enjoys drawing full-time.

“It’s essential that I draw every day. I see an improvement in my work just over this past year and a half,” Bill says.

Just recently Bill had a picture in the Trees Galore show at the Mulberry Studios in Lancaster. The picture is a Christmas tree decorated with angel’s faces. He made copies for his Christmas card with the inside saying, “There’s an angel in your tree.”

“I was in the very first Lititz Outdoor Art Show in 1967,” Bill says of his art career.

This past summer he displayed 26 pictures at the Lititz show. He has exhibited paintings, prints, and weavings in both one-man and group shows. His work is also on display in the National Vietnam Veterans Art Museum in Chicago in their permanent collection.

Bill views his art as a hobby.

“I haven’t really thought of it as money making. I don’t worry about what I’m selling, or going to galleries. It’s more for therapy and an outlet. Money isn’t the point of doing it.”

Working on one picture a day, Bill has no set hours. He likes to go to Central Market, where a friend runs a bread stand.

“I’ll stand there and draw pictures all morning,” Bill smiles. “I have met so many people in the last year. Sooner or later everyone is going to come through the Central Market.”

Besides doing his artwork, Bill enjoys going to the health club, walking, and being an extreme birdwatcher.

He is a volunteer on the board of directors for the epilepsy support unit in Lancaster, where he helps others with information and referrals. He is the outdoor art chairman for the Lancaster County Art Association and is planning art programs for the future, and he teaches art to a group of homeschooled children.

In his one-page bio, Bill wrote, “I plan to produce artwork, teach, and volunteer at various art associations in the area.”

Bill is well on his way to accomplishing those goals, and it is a boon to those of us who delight in art.