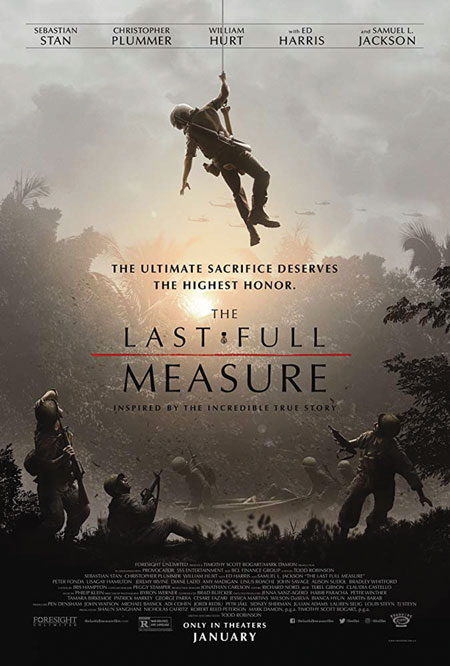 In 1999, Todd Robinson, the director/screenwriter of The Last Full Measure, learned the story of William H. Pitsenbarger. Robinson had been researching a military movie and visiting training schools.

“Nearly every place I went, the young trainees wanted to be sure that I knew the story of William Pitsenbarger,” Robinson explained to Air Force Magazine.

Called “Pits” by his comrades, the 21-year-old medic, already a veteran of over 250 combat missions, was aboard one of two helicopters summoned to evacuate wounded soldiers after they were ambushed in a Vietnam jungle in April 1966.

When the last helicopter was ready to lift off, the selfless Pits, already under heavy Viet Cong fire, volunteered to stay behind to tend to the wounded and hold off the advancing enemy. He was killed within 90 minutes.

“The whole thing jelled for me at that moment,” said Robinson. “That’s when I knew there was a story to tell.”

The narrative was compelling to Robinson, as was the aftermath tale, when wives of the surviving soldiers learned that Pits had been given an Air Force Cross — the second highest honor — for his ultimate sacrifice. It wasn’t good enough, they protested.

Encouraged by their spouses, numerous veterans subsequently petitioned Congress to elevate Pits to the Medal of Honor, the nation’s highest decoration. On Dec. 8, 2000, the medal was posthumously awarded to William H. Pitsenbarger, 34 years after his death.

Robinson and producer Sidney Sherman pitched the movie idea to over 50 production companies, but nobody showed interest. Still, Robinson had such faith in Pits’s story that he went ahead and wrote a script anyway. He then embarked on over a decade of arm-twisting to line up funding.

Finally, by 2017, things had fallen into place. Jeremy Irvine would portray Pits, with Christopher Plummer as Pits’s father and Diane Ladd as Pits’s mother. The cast was rounded out with such acting icons as Samuel L. Jackson, William Hurt, Ed Harris, and (in his final role) Peter Fonda.

The Last Full Measure story unfolds through the perspective of Scott Huffman (Sebastian Stan), a young Pentagon official assigned to investigate the unique and complicated case that sought the elevating of the prestigious award.

Roadside Attractions executives Howard Cohen and Eric d’Arbeloff proclaim, “Everyone should know about William Pitsenbarger’s bravery and life, and it’s a privilege to bring this film to theaters, where it should be seen.”

The movie opens nationwide on Jan. 17.