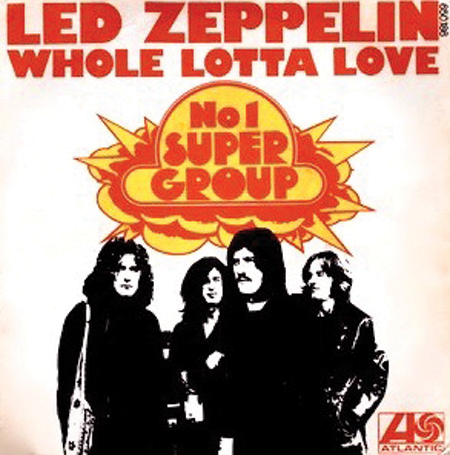 It Was 50 Years Ago Today: ‘Whole Lotta Love’

Did you ever wonder how Led Zeppelin came up with such a weird name for their band?

The group had their roots in the Yardbirds, the blues-based mid-’60s UK outfit whose members included, at various times, Eric Clapton, Jeff Beck, and Jimmy Page.

In 1968, with their popularity fading fast, they became the harder-edged New Yardbirds and, later that year, Led Zeppelin — after Who members Keith Moon and John Entwistle teased the New Yardbirds that they would go over “like a lead balloon.”

Everything about the band seemed larger than life, and Led Zeppelin became the first rock group to become fully realized heavy-metal gods.

The band’s first hit song would knock the standard rock ’n’ roll world back on its heels.

“I came up with the guitar riff for ‘Whole Lotta Love’ in the summer of 1968,” Jimmy Page explains. “I suppose my early love for big intros by rockabilly guitarists was an inspiration, but as soon as I developed the riff, I knew it was strong enough to drive the entire song, not just open it.”

The song was recorded in one afternoon. Page recalls the watershed moment.

“[Robert] kept gaining confidence during the session and gave it everything he had. His vocals, like my [guitar] solos, were about performance. He was pushing to see what he could get out of himself. We were performing for each other, almost competitively.”

Led Zeppelin abhorred the thought of having their extensive album tracks become abbreviated 45s for the AM radio audience; however, Atlantic Records did exactly that in order to bring “Whole Lotta Love” to listeners who had yet to embrace the FM rock world.

The tune ran 5:33, which was acceptable for an album track but too long for an AM-radio-oriented single. Over Led Zeppelin’s protestations, Atlantic trimmed the song to a running time of 3:12.

As with the other band members, Page was livid.

“Weeks before its release, [Atlantic] sent me an acetate of the edit. I played it once, hated it, and never listened to the short version again.”

But Atlantic’s decision turned out to be a good one; the shortened “Whole Lotta Love” shot to No. 4 on Billboard’s Hot 100 singles chart.

The story has a postscript. In 1985, blues guru Willie Dixon brought legal action against Atlantic Records, since much of “Whole Lotta Love” had been gleaned from Dixon’s obscure 1962 Chess Records ’45 of “You Need Love.” (A YouTube comparison bears this out.)