Art & Antiques by Dr. Lori: Collectibles for the Baker

Baking has been a popular pastime for years. Among Mom’s china or Grandma’s baking dishes, collectors find cooking collectibles to have good design elements and maintain high values.

Some of the most popular collectibles for bakers are not the utensils, rolling pins, or specialty pans but rather mainstay objects necessary in every baker’s kitchen. These baking-collectible objects hold their value, recall bygone days, and stir old memories of kitchen time with loved ones.

What are bakers collecting in the vintage and antiques market?

Cookbooks are a big part of any kitchen. Cherished home recipes handed down from generation to generation are well-known keepsakes.

Cookbook collectors amass their collections by country or region, like the highly regarded and coveted work The Summer Shack Cookbook by Jasper White, one of New England’s premier seafood experts; The William Greenberg Desserts Cookbook: Classic Desserts from an Iconic New York City Bakery; or Martie Duncan’s cookbook nod to her Alabama hometown of Birmingham called Magic City Cravings, which is chock-full of recipes.

The connection between cookbooks and memory is a strong one. Some cookbook lovers build collections based on specific meals, holiday fare, or occasions. Two American cookbooks highlight how Americans ate during the late 20th century and early 21st century.

The all-American cooking style of Ina Garten evinced in The Barefoot Contessa Cookbook and Martha Stewart’s Entertaining both speak to the way Americans cooked and ate over the last 30-plus years. These cookbooks and other like them all promise to be must-haves in any cookbook collection and are destined to increase in value. 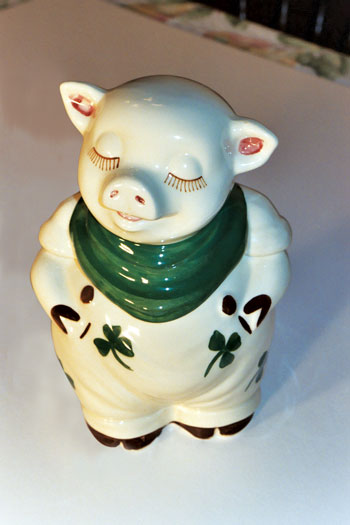 Some vintage cookbook collectors look for historic recipes like those found in collectible cookbooks like White House Cookbook; Julia Child’s Mastering the Art of French Cooking; The Joy of Cooking; Betty Crocker’s Picture Cookbook; Grandma’s Little Black Book of Recipes from 1910; Amelia Simmons’ American Cookery from 1796; Eustace Murray’s The Oyster from 1861; and Salvador Dali’s Les Diners de Gala, published in 1973, among many others.

Values for these cookbooks on the vintage and antiques market range from under $100 for some facsimile copies to several thousands of dollars for first-edition volumes.

Another collectible that is a fine gift for a baker is a vintage cookie jar. The cookie-jar-collecting craze started in the 1950s and continued to gain strength in the late 1900s. The World War II baby boom sparked a newly found need for cookies and cookie storage, so cookie jars were placed front and center in manufacturing lines and on kitchen countertops.

Postwar American examples of cookie jars were made by potteries like Brush-McCoy, Blue Ridge, and other firms. Nursery rhyme figures like Mother Goose, Humpty Dumpty, and Mary had a Little Lamb were featured.

What made the cookie-jar market spike? Andy Warhol’s cookie-jar collection was sold at auction in the late 1980s and brought values that prompted an unexpected craze. The values skyrocketed, and vintage cookie jars sold for thousands and tens of thousands of dollars.

Recently, cookie-jar values leveled off, but the cute and colorful cookie jars remained popular. They bring good money on the market today.

Like cookie jars, the display of one’s baked goods, specifically cakes, helped to make cake plates in all styles popular with collectors.

Cake plates are important collectibles for the kitchen and may be found in materials like glass, ceramic, aluminum, crystal, etc. Showing off one’s baked goods on a kitchen countertop on a pretty cake plate was commonplace.

The cake plate, usually on a stemmed or pedestal base with a matching cover or dome, is an age-old tradition. It is being revived with the interest in cake baking and over-the-top cake decorating.

Values for fine-china cake plates soar to the several hundreds of dollars, while other cake plates, in glass mainly, can be acquired for less than $250 each depending on manufacturer, design, condition, etc.

The kitchen is a great place to look if you want to start a collection that will remind you of family time. Since kitchens are the center of any home, the collectibles for the baker are certain to be of interest on the collectibles market.