A circa 1995–97 oil-on-canvas portrait painting by the late music icon David Bowie sold at auction for $108,120 Canadian recently. That statement in and of itself is not all that groundbreaking until the rest of the story is told.

The painting was purchased for $5 Canadian at a thrift store or donation center in northern Ontario.

David Robert Jones is the given name for the music legend David Bowie (1947–2016), who is best known, not for his fine art, but instead for his music.

His final album, Blackstar, was an international hit. Many of his albums entered the Billboard 200, including The Rise and Fall of Ziggy Stardust and the Spiders from Mars, Hunky Dory, Let’s Dance, Aladdin Sane, Low, and The Next Day.

Compilation albums like Best of Bowie are established hits. Bowie had the most albums in the Top 40 at one time with 12, along with the likes of Elvis Presley and Michael Jackson.

David Bowie died in Manhattan, New York, in 2016 after suffering from liver cancer for more than a year.

Early in his life, Bowie studied art and design as a young man, and throughout his life, he collected fine art of the 20th century, including pieces by the German Expressionists, Francis Bacon, and many British painters.

The painting that sold for $108,120 Canadian recently at Cowley Abbott auctioneers in Toronto, Ontario, Canada, was entitled DHead XLVI. An abstract portrait head in a turquoise, white, and red palette, DHead XLVI was part of a series of paintings dating to the mid-1990s.

The painting was discovered in the summer of 2020, when many people were donating objects galore as a result of the widespread home and storage cleaning sparked by lockdown time at home.

According to the auction house, which worked to authenticate the painting, DHead XLVI was purchased by an American collector for more than 10 times the pre-auction estimate.

Of course, the auction sales price sets a new record for a painting by David Bowie; a similar work from the series sold shortly after the musician’s death in 2016 for $39,000 Canadian in the United Kingdom. 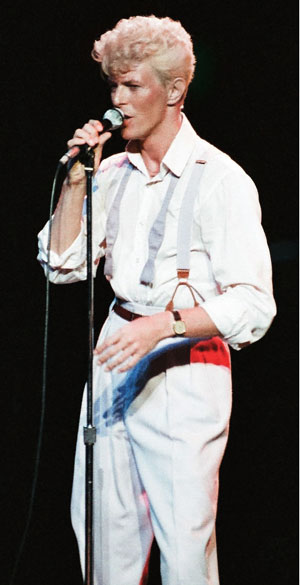 It is not unusual to see active bidding when a celebrity name is attached to a work of art that is up for bid at auction. This painting was rare because not only did the piece come from a famous collection, but the artist had star power as well.

Even more interesting was the situation surrounding the discovery of the painting: at a Canadian donation center for a few dollars.

Such finds have been much more commonplace in the wake of the global COVID pandemic and resulting home cleanouts, with increased donations of unwanted vintage art and antiques.