Over the years, I have appraised more than my fair share of collectibles, art, and antiques that have a close relationship to HRH Queen Elizabeth II of Great Britain. In 2015, she surpassed Queen Victoria and became the longest-reigning monarch in British history.

The recent death of HRH Prince Philip, the Duke of Edinburgh, and his funeral made me consider the collectibles that relate to their long union, one that started in the 1930s and continued through several decades.

Some interesting facts about the queen and her prince also seemed quite timely for this year’s wedding season, which takes place annually in June.

Princess Elizabeth and Prince Philip first met in 1934 at the wedding of Princess Marina of Greece and Denmark to Prince George, Duke of Kent. The couple announced their engagement on July 9, 1947, and married at 10:30 a.m. on Nov. 20, 1947, at Westminster Abbey in London, England.

The brochure shown here was widely distributed and included photos of the royal couple. The ceremony had 2,000 invited guests. Princess Elizabeth arrived at Westminster Abbey in the Irish State Coach alongside her father, King George VI, and she was attended by eight bridesmaids.

When it comes to any wedding, people like to know the facts about the bridal gown, the flowers, and the symbolism of the jewelry, so here’s how it was on Queen Elizabeth II’s wedding day:

The platinum-and-diamond engagement ring was made by the Philip Antrobus jewelers, and the design employed diamonds from a tiara that belonged to Prince Philip’s mother, Princess Alice of Battenberg.

The wedding ring was made from a nugget of Welsh gold, which came from the Clogau St. David’s mine, near Dolgellau in northwest Wales.

Princess Elizabeth’s wedding dress was designed by Sir Norman Hartnell, who won the design competition. At the time, Hartnell cited Italian Renaissance painter Alessandro Botticelli’s Primavera, which symbolizes the coming of spring, as his inspiration for the dress design.

The dressmakers, using duchesse satin from Scotland, had only three months to construct the dress before the November nuptials.

The wedding dress had a fitted bodice, heart-shaped neckline, and low, v-point waist. The gown featured a skirt of floor-length panels and a 15-foot-long silk tulle train that trailed behind her with enough fabric to keep her eight bridesmaids busy.

The dress featured satin applique produced at Lullingstone Castle in Kent, 10,000 seed pearls imported from the United States, and hand-sewn crystals. Her shoes, made by Edward Rayne, were high-heeled sandals of ivory duchesse satin trimmed with silver and seed-pearl buckles.

After the wedding, as royal tradition dictates, the couple waved to adoring crowds from the balcony of Buckingham Palace.

It has been several decades since that glorious day in November 1947. The royal couple enjoyed 73 years of marriage and the adoration of many the world over. 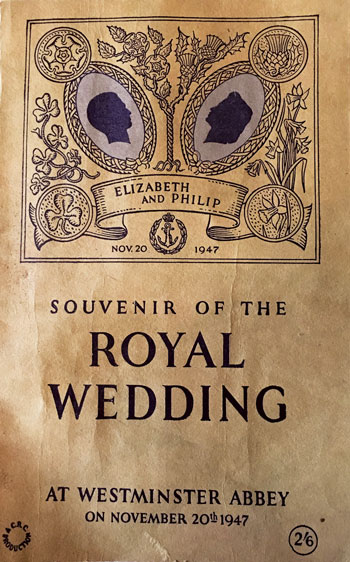