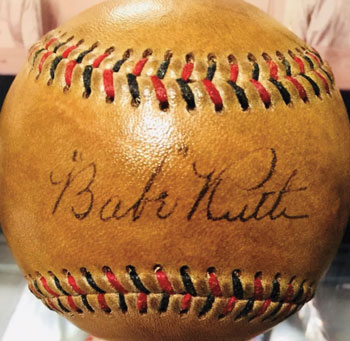 As a longtime New York Yankees fan, stemming from my father’s link to the game as a left-handed pitcher and my upbringing in Connecticut — watching the likes of Munson, Nettles, Dent, Guidry (Louisiana Lightning!), Randolph, Bonilla, Griffey, Jeter, Rivera (the Sandman!), Posada, Pettitte, and so many other baseball greats on TV and at the old Yankee Stadium — I am most excited for this summer in the Bronx.

Why? This year, in mid-June, something historic is going to happen (again) at Yankee Stadium. This event will excite both baseball fans and memorabilia collectors alike.

The personal collection of George Herman “Babe” Ruth will be auctioned off at the stadium, located at 1 E. 161st St. in the Bronx, New York, on Saturday, June 15.

While the New York Yankees will be playing the Chicago White Sox at the renamed Guaranteed Rate Field (formerly Comiskey Park and U.S. Cellular Field), a major baseball lovers and collectors event will take place in the Bronx, organized by Hunt Auctions.

These historic baseball artifacts, mementos of a life in baseball, and other special pieces of Americana derive from the personal collection of Babe Ruth. The history of Ruth has been the history of baseball in the early 20th century.

His story has also contributed to the American story in times of trouble. Ruth’s commitment to community and his work helping children in the 1920s and 1930s has become a model for other athletes.

George Herman “Babe” Ruth was signed to the Baltimore Orioles in 1914 for minor league play and then started his major league career with the Boston Red Sox. He was later an iconic slugger as a team member of the New York Yankees.

Ruth’s contract was sold to the New York Yankees in 1920, and he was a pitcher and homerun hitter until he retired from baseball in 1935.

Ruth’s stats remain impressive even by today’s standards: 714 home runs, .342 batting average, 2,213 RBIs. He was a seven-time world champion and a 12-time American League home run leader, too. Of course, he was elected to the Baseball Hall of Fame in 1936.

Babe Ruth was a major part of American culture during the Roaring 1920s and Depression-era 1930s. He endorsed consumer products, was trusted and widely popular, and devoted time as well as his celebrity status to various charities, especially those aiding children. Some maintain that Babe Ruth remains the most popular athlete in American history.

Some of the premier artifacts to be sold during this public auction that will take place in the midst of the 2019 baseball season include:

• Other special baseball objects and items of Americana