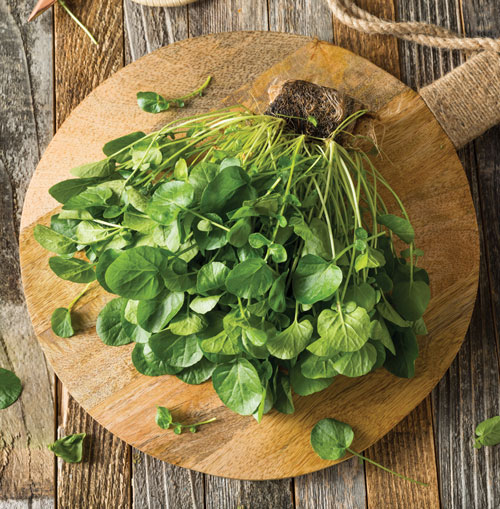 October is Breast Cancer Awareness month, so today I’d like to share with you some little-known facts about one vegetable and its impact on breast health.

It’s watercress, and even though most doctors will argue that the more chemotherapeutic drugs (anti-cancer drugs), the better, I still feel strongly that we can make dietary changes that improve outcomes, whether or not you take chemo.

They may pooh-pooh this thinking, but I still feel that eating specific foods can have a positive impact.

Research is clear and shows that a great deal of people give up on chemotherapy and fail to adhere to conventional medical treatments. Many stop altogether, or they begin to integrate various holistic remedies and dietary changes — which makes me think of watercress.

Watercress belongs to the cruciferous vegetables, same as broccoli and cauliflower, but it’s not as popular as those.

Still, I want to give it some love and attention because it has some powerful tumor-fighting compounds in it. Plus, we already know from empirical evidence that 30-40 percent of all cancers somehow benefit or respond from proper nutrition.

Researchers have investigated how watercress can be beneficial in breast cancer and other cancers. In a study published in the British Journal of Nutrition, a group of breast cancer survivors went through a phase of fasting, before consuming a bowlful of watercress about the size of a cereal bowl (approximately 80 grams of watercress).

They took some blood samples from the women at intervals over the next 24 hours.

Their blood evaluations found rather significant levels of a plant compound called phenylethyl isothiocyanate, or PEITC for short. This PEITC starves the cancer cells.

PEITC inhibits a protein called HIF (hypoxia inducible factor), which is responsible for signaling normal tissue around the tumor to send oxygen and nutrients to the tumor cells. HIF is not playing nice; it’s making your own cells boost cancer growth.

Am I saying watercress cures cancer? Of course not, but eating certain foods like watercress can’t hurt you. It can only help you, and more than anything, it puts you in a proactive position, which is empowering.

Let’s face it, hearing the word “cancer” is heart-stopping. Having something you can do that is so simple is crucial.

The researchers in the study actually validated the effects of the watercress compound PEITC — they weren’t guessing. They physically measured blood levels of that HIF in their bloodstream and saw it declining progressively after eating watercress. That is just so amazing!

Another study back in 2004 evaluated how PEITC impacts the speed at which cancer cells grow (proliferation) and the formation of tumors (tumorigenesis). The scientists were able to confirm that watercress inhibits cancer cell growth and not just that it makes cancer cells commit suicide, a process called apoptosis.

It means the party’s over for the cancer cells.

This information is not intended to diagnose, prevent, or treat your disease. For more information about the author, visit SuzyCohen.com