Competition and Temps Heat Up at 2017 Senior Games

When the success of your big, outdoor event—such as the Cumberland County Senior Games, for example—hinges on the cooperation of Mother Nature, you plead with her to grant you clear skies and dry ground.

But Mother Nature has a well-developed sense of irony: in mid-July, the gift of cloudless skies often comes with blazing temperatures.

“We didn’t get any rain, but with the heat of the day, it may have been welcomed!” said Heather DeWire, of Cumberland County Aging & Community Services, which organizes the Senior Games.

DeWire noted event planners are considering moving some of the games’ 13 events indoors next year to lessen exposure to the summer heat.

Although CCACS staff coordinate the Senior Games, a considerable number of volunteers donated their time to ensure the day went smoothly—including the high school’s football team, the Wildcats, who helped out with the track and field events.

“I really loved the intergenerational aspect,” DeWire said. “The young football players with our participants was fun to watch!”

Sixty-four athletes competed in this year’s Senior Games, ranging in age from 50-83. The cornhole, Will bowling, and shuffleboard events claimed the biggest turnout.

“We are impressed with any senior who comes out and attempts any of the events,” DeWire said. “There are always a few who are sagging under the weight of all their medals at the end of the day!”

One of those athletes struggling under the load of his wins was Gregory Bowden, of Mechanicsburg, who racked up seven gold medals and one bronze—which means he medaled in eight of the nine events in which he competed.

Those events included the 100-meter and 400-meter dashes, softball throw, basketball, Wii bowling, and cornhole, as well as ladderball, shuffleboard, and the football throw, three games Bowden had never tried before. 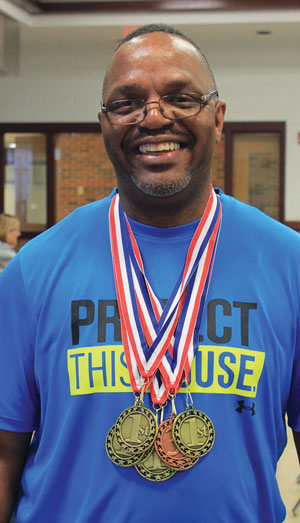 It was the second year Bowden had signed up for the day of competition.

“The overall atmosphere of the Senior Games was awesome, and [there is] so much to focus on in the future as I become older,” Bowden said.

DeWire looks forward to the feedback they receive from the athletes; it helps CCACS figure out what to keep the same and what to consider changing for next year.

“We love getting suggestions from the participants, and we were not disappointed this year,” she said. “There were a few suggestions of new game additions; one requested cooler weather for next year. We’ll see what we can do about that!”